Day 5 – A Partial Day to the Dunes

Today we were supposed to climb 5000 ft towards Panamint and finish in Stovepipe Wells. I was only able to get in a round trip to the Mesquite Sand Dunes as my time was limited.

Here are a few of the pictures from the ride and from our climb of the sand dunes a previous day.

Today we put our climbing shoes on and climbed out of Furnace Creek toward Death Valley Junction – the east entrance to the National Park. The climb is 3000 ft., followed by a 1000 ft. descent to Death Valley Junction. This, by the way, is not as much of a ghost town, as a town that peaked in 1910 and did not age well. Very few, if any, people live there. As we ascended, we passed Zabriski Point, a trailhead for an amazing erosional landscape [more on this later].  The climb was about 3%, with some parts at 5 and 6%. This is not particularly hard, just a continuous 19 mile climb.

Click on the image below to see a satellite view of the ride.

I have a few pictures from the ride, our amazing 3-mile hike down from Zabriski Point to the Golden Canyon Trailhead. Seeing the erosion on all the different rock layers [that formed in the lack before Death Valley was created] was truly remarkable. In fact, it looked like mud was splattered on top of the eroded features, a very bizarre site. The best we could surmise was that following a big rain, a large piece of rock fell from the upper cliffs, with mud splashing around as the rock moved downhill. 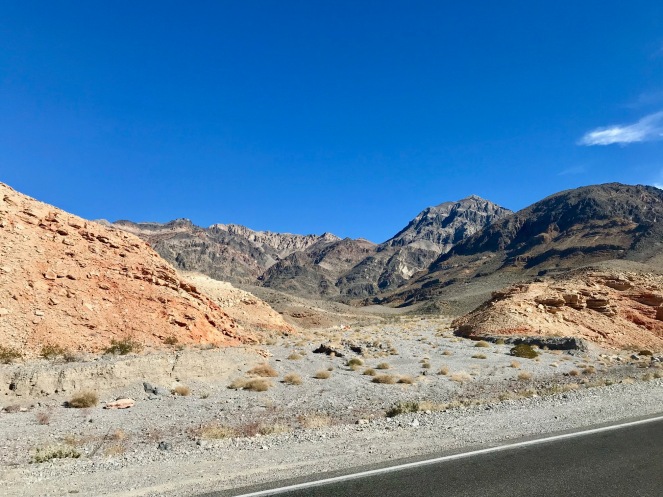 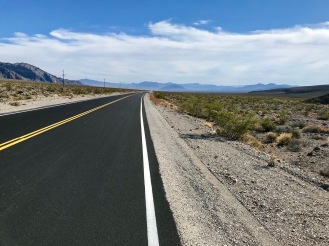 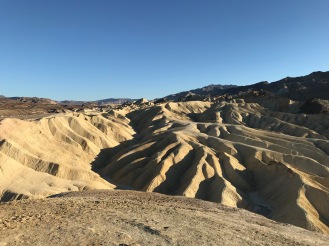 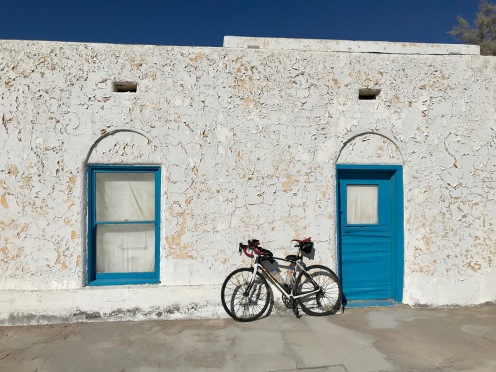 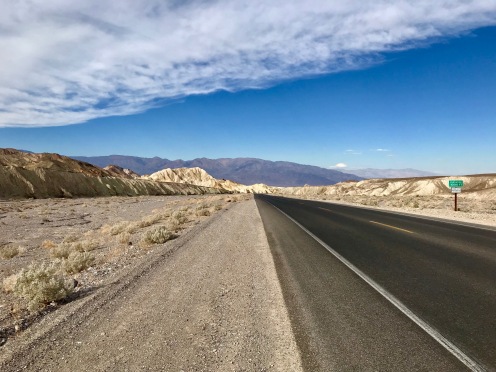 Today the clouds disappeared and the wind and heat arrived. We shuttled to the Ubehebe Crater, a steam magma explosion from 2000+ years ago. The crater, measuring 700 ft deep, is quite a site to behold in the morning sun. We began our ride there, and cycled just over 57 miles back to our hotel. While there was almost 1400 ft. of climbing, we lost about 2600 ft. of total elevation.

Hydration is vital when cycling; being in Death Valley means added precaution to stay hydrated. I use Nuun tablets in my water to ensure needed electrolytes without added calories. I like to consume my calories separate from the electrolytes…it’s tastier that way.

Click the image below to see the satellite view of the ride today.

After the ride, we had a quick lunch at the hotel parking lot, then got ready to hike the Mesquite Sand Dunes. They are quite beautiful with Death Valley surrounding them. A typical picture (not mine) looks like this:

A few of my pictures from today: 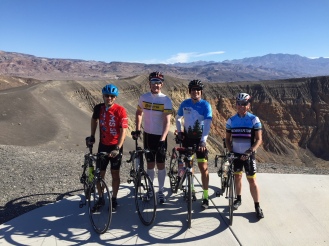 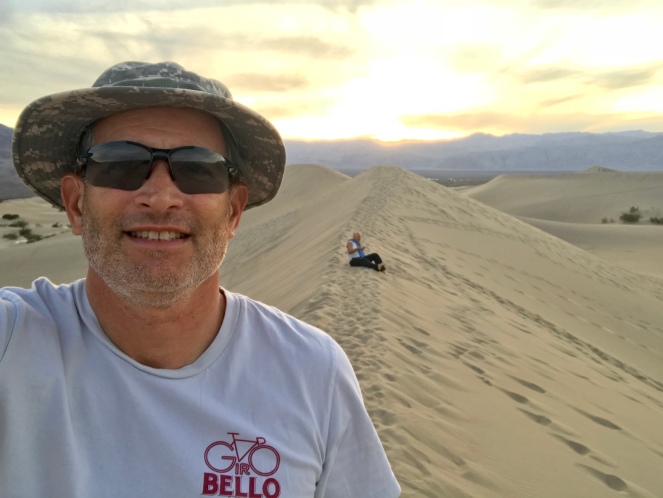 Tomorrow we begin our two days of climbing….stay tuned. 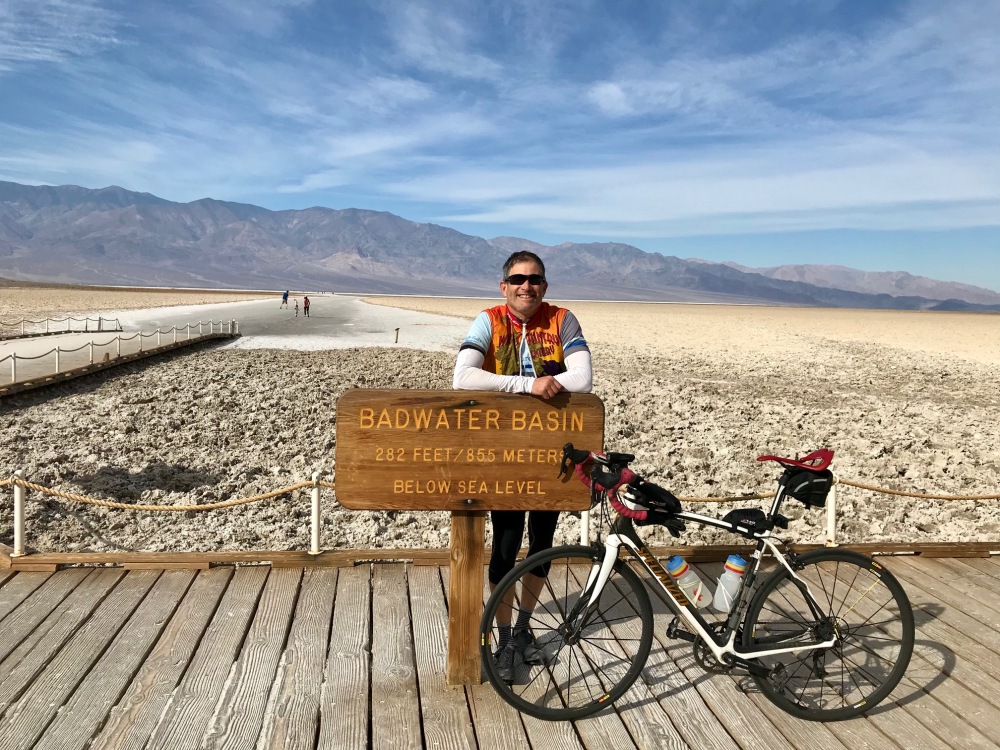 Today we biked south to Badwater, the lowest spot in North America. We biked along a road that could easily have been the shoreline of Lake Death Valley. Oftentimes, on our right (going south), were salt flats. At Badwater there is actually a very small puddle of water, which is obviously bad. The weather today had high clouds, but it was clear that the blue skies were arriving as the temperatures began to climb. We did see three birds today [in the report of wildlife], and one was a bonafide roadrunner. However, we did not see the coyote of cartoon fame (nor his pile of Acme tools and explosives).  After Badwater, we continued south toward a turn around.

On the way back from the turn around, the wind picked up a bit. Between two of our SAG stops, we had a four-person paceline (where bikers stay in close proximity to one another in order to leverage the slip stream behind the cyclist) going for about 10 miles.   It is very tough, both physically and mentally, to stay 12 inches behind the cyclist in front of you, while doing 20 MPH. In the graphic below, you can see the analysis of the ride dynamics between miles 59 and 69. You may note the speed staying consistently around 21 MPH, with my hear rate hitting a higher level as I worked to keep up with the group. You can also see the power becoming quite variable as I had to keep the distance constant. The elevated speed helped increase my average speed.

Click on the image below to see our route next to the eastern mountains of Death Valley. I did not anticipate having so many opportunities to take some breathtaking photos along the way, but I certainly did. In the end, I had many more that I could publish here. 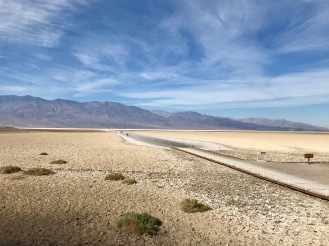 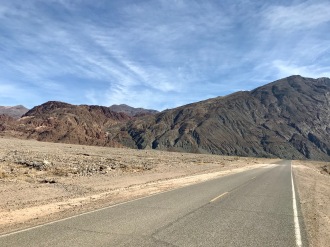 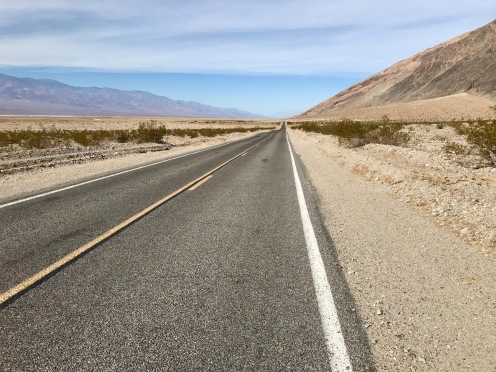 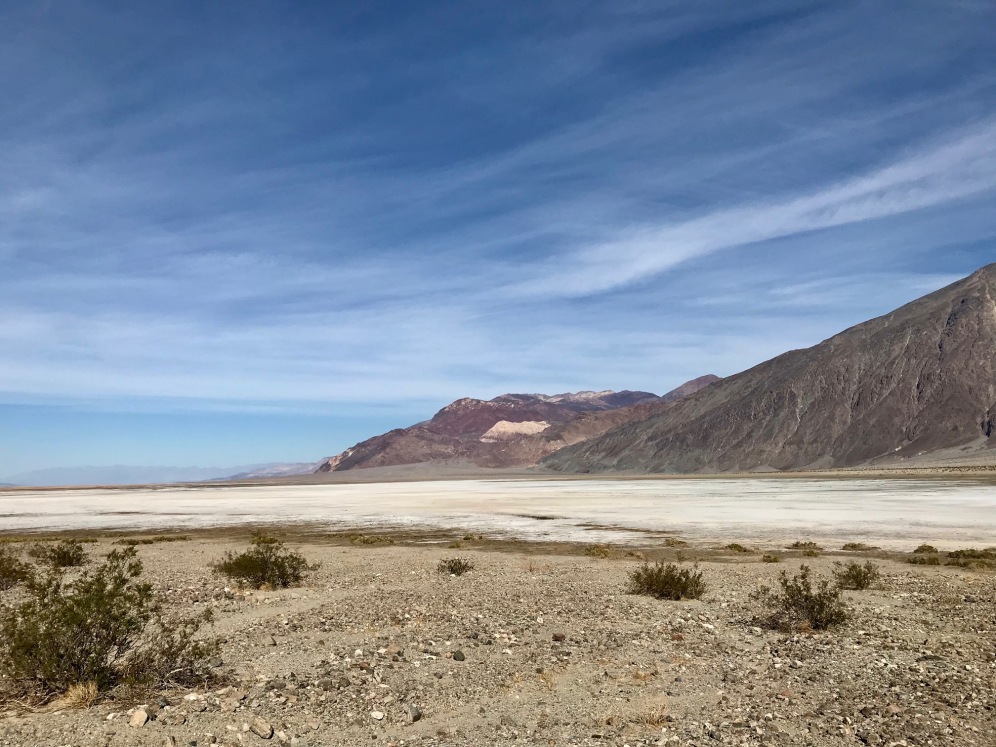 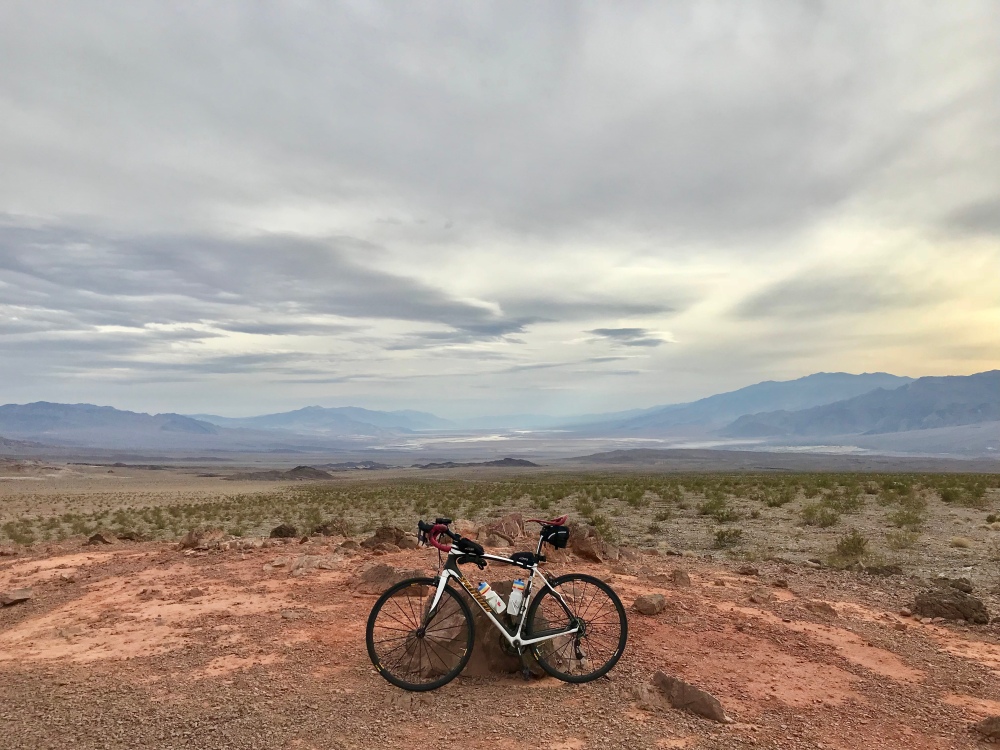 What a great time of year to do the Death Valley Cycling Escapes Tour. Mornings are a brisk 53 degrees and max temperatures during the day are anticipated to be in the low 80’s. Getting to the Furnace Creek Inn, the base camp of our tour, was a 450 mile drive through a variety of desert conditions and  mountain passes, once passed Bakersfield. We had to drive through the Mojave Desert (very different than the Arizona Sonoran desert). While we stayed close to the China Lake the night before the tour, we did not see an UFO’s. The tour group for this trip was small, with two guys from New Zealand and one from Vancouver. The first ride on these tours is usually a shakeout ride that is neither too easy nor too hard. Today we rode from the hotel toward the eastern entrance to Death Valley, called Hell’s Gate. Seeing my Garmin bike computer tell me the elevation was -190 below sea level was pretty strange. We biked along the main road of Death Valley, which was a great road surface, then climbed 10 miles and 2000 ft to Hell’s Gate.

You can see the ride from a bird’s eye view by clicking on the image below: As today was slightly overcast, the picture taking was a bit muted. Here are my four favorites:

Death Valley did not show me much fauna today, just flies and a few birds around the hotel. Though the flora is not that impressive, I did see [at an elevation of about 1800 ft] some Cholla Cactus, similar to what I saw in my Palm Springs Joshua Tree Trip.  You really get the feeling that this place is “Dead”. Tomorrow we have a long day and will stay entirely below sea level.